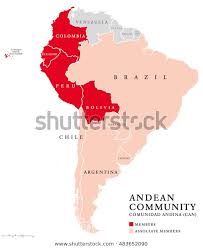 Morocco has become an observer of the Andean Community of Nations, a free trade area mustering Bolivia, Colombia, Ecuador, and Peru. The Kingdom is the first Arab and African country to gain such a status, which enables it to enhance its presence in Latin America.

The decision was made during the 20th meeting of the Andean Presidential Council held Wednesday in Bogotá.

The membership will bring Morocco and South Latin American countries closer, said the Moroccan foreign Affairs Department, noting that the move is part of the policy of openness advocated by King Mohammed VI. It opens up huge business opportunities and partnership in a global world marked by economic interdependence and cultural interaction.

Previously known as the “Andean Pact”, the Andean Community is an intergovernamental organization meant to promote the expansion of markets and guarantee an effective economic development to the region.