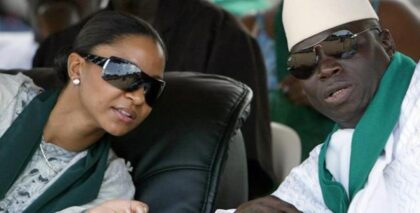 The US Treasury announced that financial sanctions have been applied to the former First Lady of The Gambia, Zineb Souma Yahya Jammeh, who has been living in exile in Equatorial Guinea since February 2017. The wife of the former Gambian dictator is suspected of controlling many assets in the United States.

The US Treasury Department blames Zineb Souma Yahya Jammeh for using her child protection foundation as a front to “facilitate the illicit transfer of funds to her husband,” a statement said.

A lawsuit filed last summer is said to have tipped the scales: on July 15, the US Department of Justice requested the confiscation of a Maryland home acquired for $3.5 million, financed by a subsidiary owned by Zineb Jammeh.

The ex-First Lady was already in the sights of Gambian justice, which, in a report published last year, accused her of having collected 2 million dollars in cash through her foundation. Funds that were allegedly spent on ceremonies.
For Reed Brody, legal counsel at HRW, the financial sanctions are significant because they show that the “noose is tightening” around the Jammeh family.

This human rights activist hopes that once frozen and confiscated, these funds will be returned to compensate the victims of violence under the dictatorship of Yahya Jammeh.

Since December 2017, the assets of the former Gambian president in the United States had already been frozen. The same is true in The Gambia, where authorities accuse him of embezzling nearly $50 million from state coffers.