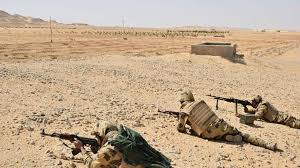 The Egyptian army said it foiled on Tuesday a terror attack and killed 18 alleged militants as servicemen repelled an attack on a military post in North Sinai.

The army in a statement said one of the attackers was wearing an explosive belt during the assault targeting the military outpost in Bir al-Abed area.

Forces destroyed four vehicles including three car bombs as they chased the attackers in a farm and some uninhabited homes, the statement said.

Egypt has been grappling with increasing militancy in the restive Sinai province since 2013. President Fattah al-Sisi has given a blank check to army to use brutal force in view of crashing the suspected militants.

The attacks, which spilled to other cities, have killed hundreds of army forces.

In May, the army said 15 of its men had died or been wounded in operations in the Sinai Peninsula. It also claimed it killed 126 suspected militants