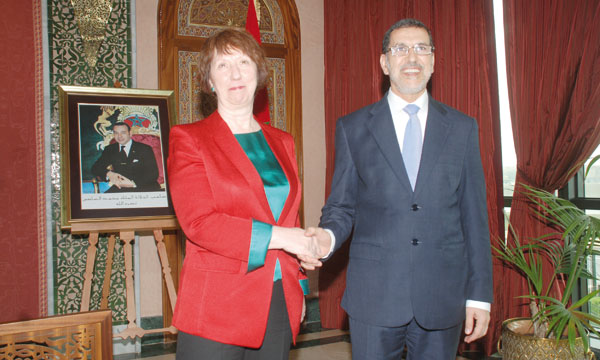 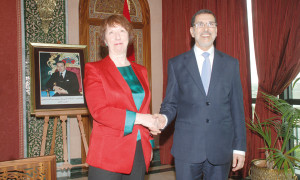 The High Representative of the European Union for Foreign Affairs, Catherine Ashton has described Morocco as “a key partner of the European Union” and hailed the constructive role played by the North African nation on the international scene “to resolve instability in the Sahel and in Syria”.
Ashton, who met lately in Brussels with Moroccan Foreign Minister Saad-eddine El Othmani, also welcomed “the positive steps taken in recent months to intensify our existing cooperation still further, in particular through the agreement of an EU-Morocco Action Plan 2013-2017”, which seeks to make of Morocco one of the EU’s leading partners. This joint action plan aims to strengthen partnership between the two sides by setting ambitious new goals for deeper political, economic and human relations.
The EU has granted Morocco an “advanced status” reflecting the EU-Morocco special partnership based on shared responsibility and common values such as democracy, the rule of law, good governance, respect for human rights, market economics, free trade, sustainable development, poverty reduction and the implementation of political, economic and institutional reforms.
On the basis of the advanced status of their relations, Morocco and EU are endeavoring to further strengthen “this exemplary and mutually beneficial partnership in order to take up shared political, economic and social challenges together and in a spirit of solidarity”.
The two sides also agreed to set up a common area of peace and stability which will help better coordinate actions in crisis management as well as in the prevention and resolution of conflicts in the region.
The EU and Morocco have also opened talks for a Deep and Comprehensive Free Trade Area (DCFTA) is to upgrade the existing association agreement which guarantees tariff-free trade for many products since 2000.
The DCFTA is expected to deepen existing trade relations in a host of areas not yet covered, such as services and public procurement, as well as to bring better protection for investments and new commitments on competition and intellectual property rights.
According to EU officials, these negotiations show Europe’s strong commitment to further developing its trade and investment ties with Southern Mediterranean partners who are committed to political and economic reforms.
The DCFTA will be an important step towards gradually integrating the Moroccan economy into the EU single market, removing obstacles to trade both at the border and behind the border. It will ‘deepen’ the integration by bringing Moroccan trade-related requirements, industrial standards, technical regulations and animal and plant health measures closer to EU legislation and cover a ‘comprehensive’ range of areas that are fundamental to a modern, transparent and predictable trade and investment regime.
The High Representative of the European Union for Foreign Affairs, Catherine Ashton has commended lately “the Moroccan Government’s commitment to an ambitious reform program”, saying she is “following with close interest planned reforms concerning women’s issues, including a Government Plan for Equality”.
Mrs. Ashton has urged the Moroccan Government “to move swiftly towards implementation of these and other key reforms to which it is committed, in the fields of justice, the economy and the media, affirming that the EU will “continue to support Morocco’s reform process” through European neighborhood funding, of which Morocco is the largest recipient.

North Africa Post's news desk is composed of journalists and editors, who are constantly working to provide new and accurate stories to NAP readers.
NEWER POSTEgypt: President’s adviser blames IMF for delaying the loan
OLDER POSTNegotiations underway between Mali and the MNLA