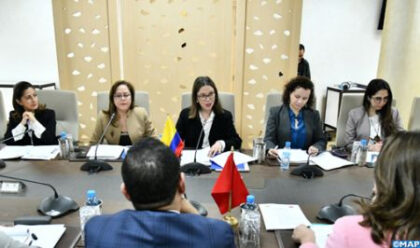 Colombia’s Deputy Minister for Multilateral Affairs, Adriana Mejia Hernandez, has reaffirmed her country’s firm support to the Morocco-proposed autonomy plan offered for the Sahara and to the sustained efforts made by Rabat for the settlement of the Sahara issue within the UN framework.

Bogota backs Morocco’s stand aimed at achieving a lasting solution to the Sahara dispute, which is “vital issue for its sovereignty and its territorial integrity”, said Mrs. Adriana during the meeting of the Moroccan-Colombian cooperation committee convened Thursday in Rabat.

She described Morocco as a strategic partner of Colombia and a gateway to the African continent and the Arab world. The Colombian senior diplomat, who praised the positive momentum of bilateral cooperation ties, said the two countries share a common political vision regarding several international issues.

The Rabat meeting of the joint Moroccan-Colombian cooperation committee endorsed an action plan for the 2020-2022 period to bolster partnership between the two countries in various sectors, including agriculture, crafts, culture, archives, sport, health, security and tourism.

The two parties also underlined their will to develop cooperation and the exchange of experience in higher education and scientific research, in particular by strengthening academic cooperation, building partnerships between higher education and scientific research institutions and promoting Moroccan and Colombian cultures at the two countries’ universities.