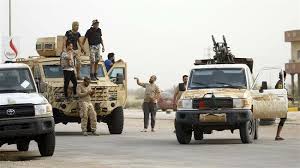 Libya’s UN-sponsored Government of National Accord (GNA) Sunday debunked an allegation by rival administration that Turkey-backed Syrian National Army (SNA) forces, opposed to President Bashar al-Assad, have been fighting on its side.

“Circulating such recordings is a desperate attempt to distort our forces’ victories,” the media office of the Libyan internationally recognized government headquartered in Tripoli said.

The reaction came after social media accounts aligned with Khalifa Haftar, the retired Libyan army General who backs GNA’s rival administration based in the east, circulated video footages showing a group of fighters speaking in a Syrian dialect, claiming to have captured a military camp from Haftar-controlled forces, reports say.

Haftar forces have been trying since early April to capture the Libyan capital over allegations that the GNA is controlled by militias and terrorists.

The Syrian Observatory for Human Rights, a UK-based war monitor connected with Syrian rebels on Sunday indicated that around 300 SNA fighters sponsored by Turkey were in Libya.

The SNA fighters were spotted in a GNA camp on the volatile southern outskirts of Tripoli, the Observatory said.

This is the second time Haftar forces accuse Turkey of smuggling fighters into Libya. Last week, the army of the retired General accused Tunisia of becoming a transit point for Syrian terror groups paid by Turkey to fight at the side of the GNA.

Ties between the GNA and Ankara have been bolstered following last month military and maritime agreements between the two sides. Turkey last week said it could send troops as early as January to prop up the GNA following an official request made reportedly by the GNA also last week.