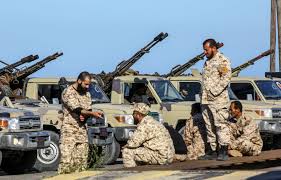 Islamic countries leaders, meeting in Makkah Friday, for the 14th OIC Summit, urged Libyan parties to cease hostilities around Tripoli, to stop bloodshed amongst Libyan people, and appealed to them to return to the UN-sponsored political process.

The leaders, in a statement over Libya, voiced grave concern over the military operations around Tripoli and urged all parties to stop fighting and leave the capital.

They said this military escalation was threatening Libya’s stability, international peace and security, and in addition increase the terrorism threat.

They urged the Libyan parties to prevent conflicts and return to UN-sponsored political process in order to reach a comprehensive settlement.

They called for halting foreign interference in Libyan affairs as such interference complicates further the situation.

The OIC leaders said they were committed to the unit of the Libyan institutions to achieve security and stability.

The 14th OIC Summit, which coincided with the 50th anniversary of the creation of the Organization of Islamic Cooperation, examined ways to develop a unified position on current issues and events in the Islamic world and underlined the need to work earnestly “in order to counter the political, economic and cultural challenges facing OIC member States.”

The Summit discussed the latest developments in the Palestinian issue, as well as the situation inLibya, Syria, Yemen, Sudan, Somalia and Afghanistan.

North Africa Post's news desk is composed of journalists and editors, who are constantly working to provide new and accurate stories to NAP readers.
NEWER POSTMorocco, a key partner in UN peacekeeping missions- official
OLDER POSTMorocco to sell 8% of the capital of Maroc telecom