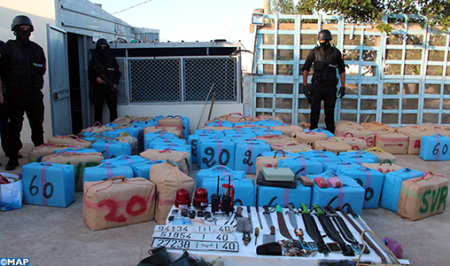 Seizure of over 9 tons of cannabis near Tangier; five drug dealers arrested 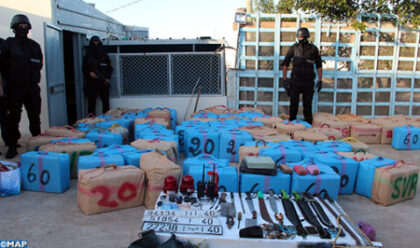 Policemen arrested on Friday five people for their alleged links to an international drug trafficking network and seized 9.1 tons of cannabis resin.

The banned substance was seized in a farm in Gzennaya region, about 20 km from Tangier, the national police said in a statement, adding that the operation was conducted on the basis of information provided by the departments of the Directorate General of Territorial Surveillance (DGST).

The search led to the seizure of three inflatable boats and marine navigation equipment, including torches, a compass and 20 barrels of fuel, in addition to two wireless communication devices.

The judicial police also seized machinery and equipment used in international drug trafficking in the farm and at the home of one of the suspects, including a road tractor, eight large trailers containing cavities for the trafficking of large quantities of drugs, a steel structure of a trailer, four cars, falsified license plates, a large batch of bladed weapons, a flashlight, a camera, a hood and a sum of money in dirhams.

The suspects will be interrogated to determine their alleged links to national and international drug trafficking and money laundering networks, and the land and sea routes used in trafficking.