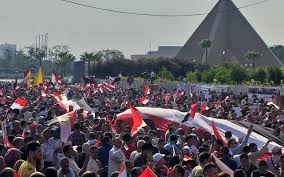 The UN human rights chief has urged Egyptian authorities to respect the right to freedom of expression and peaceful assembly, “in full compliance with international norms and standards.”

Human Rights Commissioner Michelle Bachelet expressed “serious concerns” over reports of a lack of due process, after authorities in Egypt made widespread arrests during protests last week.

This came in a statement issued on Friday, by Mrs. Bachelet, following reports by Egyptian civil society organizations that more than 2,000 people – including lawyers, human rights defenders, political activists, university professors and journalists – were detained before, during and after street protests that took place in a number of Egyptian cities on 20-21 September.

“Reports also suggest some of those detained were denied legal representation when appearing before the Public Prosecutor, and some have allegedly been charged with serious offences,” said the statement from OHCHR.

“I remind the Egyptian government that under international law people have a right to protest peacefully,” said Ms. Bachelet. “They also have a right to express their opinions, including on social media. They should never be detained, let alone charged with serious offences, simply for exercising those rights.”

“I urge the authorities to radically change their approach to any future protests, including those that may take place today,” she added.

News reports said that some protesters had once again taken to the streets in several cities across Egypt on Friday afternoon, calling for Egyptian President Abdel Fattah el-Sisi to step down.