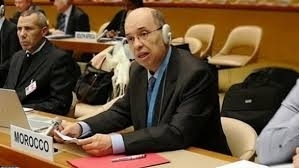 A group of 23 states participating in the ongoing 42nd session of the Human Rights Council in Geneva have renewed support to Morocco’s territorial integrity and underlined the relevance of the autonomy plan proposed by the Kingdom to settle definitively the artificial conflict around the Moroccan Sahara.

In a statement read out by Morocco’s permanent representative to the UN in Geneva, Omar Zniber, the group stresses that the autonomy initiative for the Moroccan Sahara has been recognized by the Security Council as a serious and credible basis for definitively resolving this regional dispute, reports the official news agency MAP.

“The resolution of this political dispute will contribute to the realization of the legitimate aspirations of the African and Arab peoples in terms of integration and development, an objective to which Morocco is strongly committed,” the statement points out.

The Security Council also welcomed the initiatives taken by Morocco for the promotion of human rights in the Sahara, and repeatedly called for a census and registration of the populations settled in the Tindouf camps, the statement signatory countries recall.

They also point out that Morocco has engaged in a constructive, voluntary and profound interaction with the United Nations human rights system, in particular the Office of the High Commissioner for Human Rights (OHCHR) and special procedures.

Part of 12 special procedures, visits were paid to the Sahara cities of Laayoune and Dakhla, where the visiting delegations had free and unrestricted access to all stakeholders, particularly representatives of the local civil society, the statement underlines, recalling in this connection the visit of an OHCHR technical mission to Morocco.

The signatory countries underscore further that the Sahara issue is a political dispute handled by the Security Council, which is making efforts towards a negotiated, mutually acceptable political solution, insisting that “the interaction of the Member States with the UNHRC and the High Commissioner must remain bilateral and free from any instrumentalization; otherwise sterile debates and counterproductive policies would be generated within the Human Rights Council.”