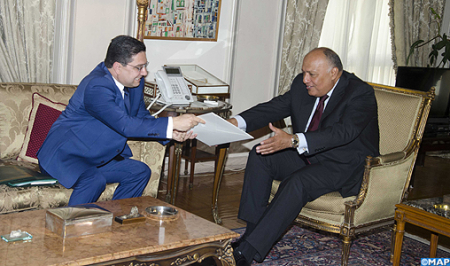 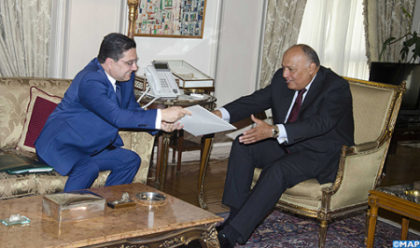 King Mohammed VI has addressed a message to Egyptian President Abdel Fattah al-Sisi on ways to enhance bilateral cooperation between the two countries.

The royal message was handed by Moroccan Foreign Minister Nasser Bourita to his Egyptian peer Sameh Choukri at a meeting in Cairo Monday.

The two ministers reviewed the progress made in a number of areas of bilateral cooperation and stressed the importance to explore new horizons and expand cooperation to new areas.

The two sides also discussed several regional issues of common interest, including the challenges facing the region and the developments in the Arab region, said Egyptian foreign ministry spokesman Ahmed Hafez, at the end of the meeting.

The two ministers stressed in this regard the importance of strengthening mechanisms of solidarity and joint Arab action in facing the various challenges in the region and pushing for political solutions that will achieve security and stability and preserve the unity and sovereignty of Arab states, the spokesman said.

The two officials also exchanged views on developments on the African arena and issues related to the African Union, currently chaired by Egypt.

North Africa Post's news desk is composed of journalists and editors, who are constantly working to provide new and accurate stories to NAP readers.
NEWER POSTMorocco to upgrade its F16 fleet for $250 million
OLDER POSTUK & Morocco to Enhance Defense Cooperation