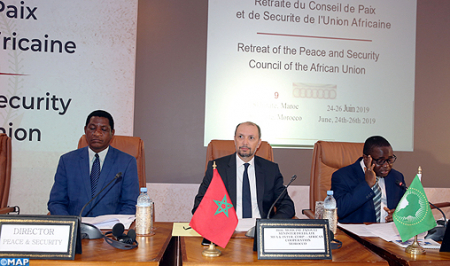 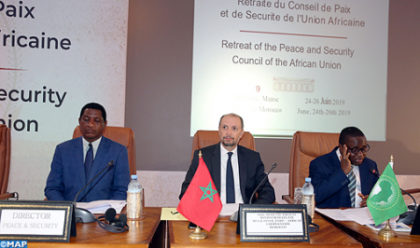 The Peace and Security Council (PSC) of the African Union opened on Monday in the Moroccan coastal city of Skhirat (Rabat ouskirts) a three-day meeting to look into ways of improving its working methods for a better prevention, management and resolution of conflicts in the African continent.

In his opening address, acting chairman of PSC Ambassador Brahima Patrick Kapuwa (Sierra Leone) called for the adoption of concrete measures that will enable this decision-making body of the AU to fulfill its mission and goals consisting of promoting peace and stability in Africa.

The gathering is held in presence of Moroccan Minister Delegate for African Cooperation, Mohcine Jazouli. Morocco will take over the upcoming rotating chairmanship of the PSC.

Last year, Rabat hosted a seminar on “Improving the working methods of the Peace and Security Council of the African Union”. Participants stressed the need to reform the PSC to make it more efficient in handling the peace and security challenges in Africa.
The PSC 15 members have equal voting powers. All members are elected by the AU Executive Council and endorsed by the AU Assembly during its ordinary sessions.

The PSC is tasked with anticipating and preventing disputes and conflicts. Its missions also include undertaking peace-making and peace-building initiatives to resolve conflicts, authorizing the deployment of peace support missions, promoting peace, security and stability in Africa…