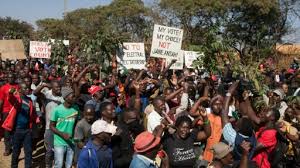 Police and protestors clashed in three cities in Malawi on Thursday during countrywide demonstrations over the disputed result of last month’s presidential election.

Malawian President Peter Mutharika has been narrowly re-elected for a second five-year term following a hotly-contested vote, according to the country’s electoral commission.

Thousands of opposition supporters participated in the demonstrations in the capital, Lilongwe, demanding the immediate resignation of Malawi Electoral Commission chairperson Jane Ansah. It is the biggest rallies since the vote count was announced in the southern African nation.

According to local media, some police officers were beaten and severely injured minutes after an armored vehicle threatened the protesters.

Last month election was marred by allegations of fraud. Some claim many results sheets were altered using correction fluid.

The two main opposition parties have challenged the vote outcome in court, with judges due to rule on Friday on whether or not to dismiss the case, as requested by Malawian President Peter Mutharika.

Malawi Police has issued a strong warning against those who will take advantage of the demonstrations to ignite violence.

Malawi won independence from colonial ruler Britain in 1964, and was then ruled by Hastings Banda as a one-party state until the first multi-party elections in 1994. The country, which has a population of 18 million people, has one million adults living with HIV — one of the highest HIV prevalence rates in the world.