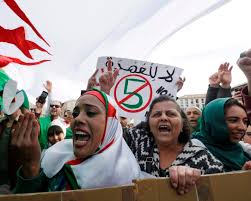 Algerian authorities have expelled Reuters’s reporter Saturday for covering a demonstration against President Abdelaziz Bouteflika and his regime staged by tens of thousands of Algerians.

The reporter, Tarek Amara from Tunisia was detained and then flown to neighboring Tunisia after he covered the March 29 demonstration; one of the protests regularly staged since February 22 to demand the resignation of the 82-year-old Bouteflika’s and a change of his regime.

Amara reported that about one million people joined the demonstration on Friday. An Algerian official source rejected the figure without providing an official account of the number of protesters.

Amara’s employer in a statement said it stands by its coverge, Middle East Monitor reports.

“We are concerned by the Algerian authorities’ treatment of Reuters journalist Tarek Amara and are seeking further information on the matter,” Reuters’s spokesman said.

“Tarek’s reporting on the protests in Algiers was fair and balanced.”