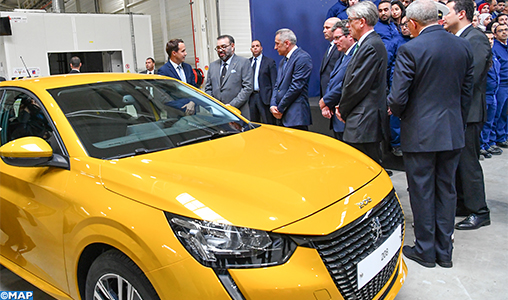 King Mohammed VI chaired, on Thursday in the integrated industrial platform “Atlantic Free Zone”, in the commune of Amer Saflia (province of Kenitra), the inauguration of the new French automaker PSA Peugeot plant worth €557 million. The group’s industrial project in Morocco is based on the creation of a complete automotive ecosystem.

About 80% of PSA Kenitra’s output will be exported to Africa, the Middle East and Turkey with a local sourcing rate of over 60 percent. The plant in Kenitra will thus help the group meet the growth of sales in the region and to make the Middle East & Africa a major pillar of profitable growth for the group.

“We have exceeded €1 billion of local sourcing, which was planned for 2022 and we will reach €2 billion in 2023,” said the office of the Minister of Industry, Investment, Trade, and Digital Economy, Moulay Hafid Elalamy.

Renault is now producing 12% of its cars globally in its Tangier factory. China’s Byd, is also on its way to launch production of electrical vehicles in the country.