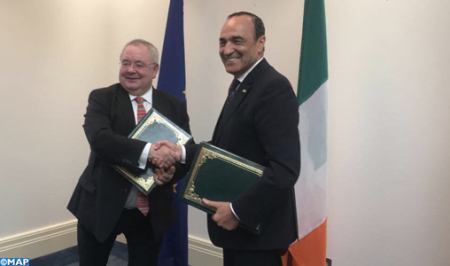 For Ireland, Morocco is Gateway to African Markets 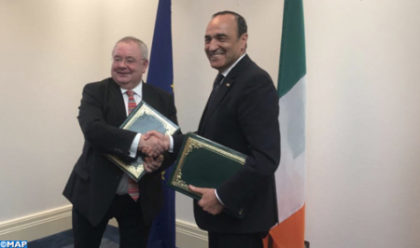 Morocco offers European investors and businesses a gateway to the emerging African markets, said on Wednesday in Dublin Speaker of the Irish Parliament Seán Ó Fearghaíl.

The Irish official made the remarks after signing with Moroccan peer Habib El Malki an agreement to boost cooperation ties between the two countries’ legislative institutions.

Mr. Ó Fearghaíl extolled on this occasion Morocco’s huge economic potentials and its leadership in the region, particularly in the fight against illegal migration and climate change.

The Speaker of the Irish Parliament said his country will open an embassy in Rabat in 2020 to boost tourism, trade and economic cooperation between the two countries.

He also highlighted the convergence of views between Rabat and Dublin on several international issues, saying that the creation of the two parliamentary friendship groups will consolidate political dialogue between the two countries.

For his part, Mr. El Malki said Ireland views Morocco “as a reliable and serious partner”, underlining the huge untapped opportunities offered for the two countries businessmen in the fields of trade, agriculture, fisheries…
During his visit to Dublin, El Malki also conferred with trade minister Pat Breen who said that there is an “excellent potential” for trade growth between Morocco and Ireland.

The Irish official stressed the importance of the Irish embassy to be opened next year in Rabat and hailed the decision of Irish airline Aer Lingus to launch flights linking Ireland to the cities of Marrakech and Agadir, the Kingdom’s most popular travel destinations.