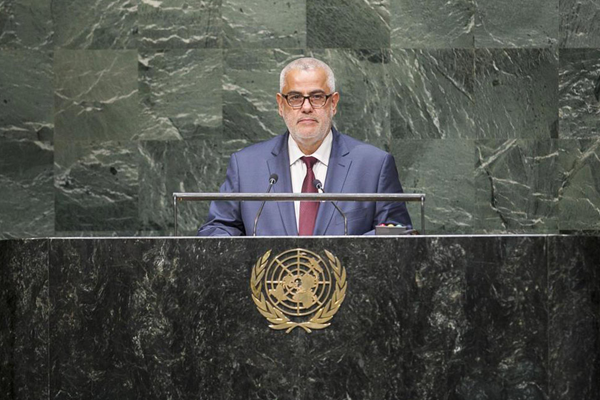 Morocco has warned the international community that it should support developing countries and help them achieve progress, security and stability, otherwise its inaction would entail more conflicts and greater fanaticism, violence and terrorism, plagues that are all kindled by the feelings of injustice and exclusion.

“The world stands at a crossroads today. Either the international community supports developing countries to help them achieve progress and ensure security and stability, or we shall all face the consequences of more conflicts and greater fanaticism, violence and terrorism – all of which feed on feelings of injustice and exclusion – and no part of the world shall be safe.”

The warning came in a speech by Morocco’s King Mohammed VI before the 69th session of the UN General Assembly that was read out on his behalf by Head of Government Abdelilah Benkirane.

“As the world grows more acutely aware of the cross-border threats posed by the lack of sustainable and human development, and as we realize that ours is ultimately a common destiny, I am sure there will be a global awakening regarding the need to work for a more secure, more equitable and more humane world,” the king pointed out.

Underscoring that achieving development does not merely hinge on a set of projects and on funding, he urged the West to treat developing countries fairly, especially in Africa, and to address the development issue in an objective manner.

“Sustainable development is not something which can be achieved through decisions and ready-made prescriptions. Nor is there a single model in this area. Each country follows a path of its own, having taken into consideration its historical development, cultural heritage, human and natural resources, specific political circumstances, as well as its economic choices and the obstacles and challenges facing it.”

The King who insisted on the need to respect the characteristic values and principles of each country as it builds its own development model, said “what applies to the West should not be used as the sole criterion for determining the efficiency of other development models, nor should one make comparisons between countries – however similar their circumstances may be – even when these countries belong to the same geographical area.”

The King also recalled the severe damage Colonialism caused to colonized countries, asserting that “the colonizers bear a historic responsibility for the tough – and at times tragic – circumstances experienced by some countries of the South, particularly in Africa.”

Given the adverse consequences suffered, former colonial powers have no right to ask the countries of the South to introduce radical change rapidly, on the basis of a frame of reference with which they are unfamiliar, he pointed out, urging the international community to show more realism and wisdom when dealing with these countries and to stop imposing on them harsh conditions which hinder these countries’ normal course towards progress.

“In fact, all that Western countries and their affiliated institutions do is give lessons, and, at best, a few pieces of advice. As for support, it is very limited and is always conditional,” he said adding that the West asks the countries of the South to achieve stability and development within a very short time frame and according to specific, imposed conditions, without taking into account these countries’ development processes or their specific national circumstances.

There can be no stability without development and development cannot be achieved without stability. Both hinge on respect for the sovereignty of states, their territorial integrity, culture and customs, as well as on a dignified life for their citizens and what peoples really need is fruitful cooperation grounded in mutual respect.

North Africa Post's news desk is composed of journalists and editors, who are constantly working to provide new and accurate stories to NAP readers.
NEWER POSTTunisia : Ennahda seeks US support ahead of elections
OLDER POSTEl-Sisi to explain Egypt’s “reality” to Obama