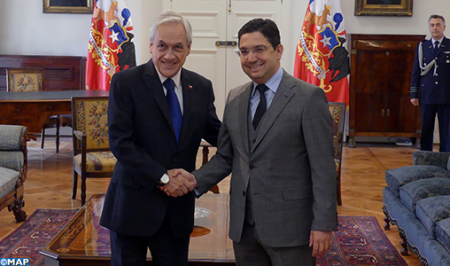 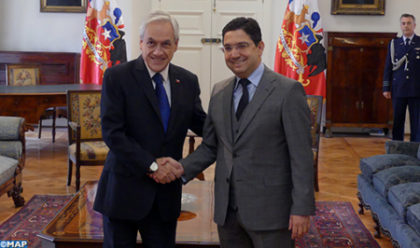 The government of Chile expressed on Friday its full support to the autonomy plan offered by Morocco to reach a realistic, viable and definitive political solution to the regional dispute over the Sahara.

In a joint statement issued in Santiago following the visit paid by Moroccan Minister of Foreign Affairs Nasser Bourita, the government of Chile voiced its “support to the efforts made by the UN Secretary General and his Personal Envoy” for the Sahara, hailing Morocco’s serious endeavor seeking a realistic, practical and lasting political solution to the artificial conflict over the Sahara.

During his visit to Chile, Bourita briefed top officials of this country on latest developments of the Sahara issue, focusing on the growing international support to the Moroccan autonomy plan, which is the basis for a realistic, serious and credible solution to the Sahara issue in line with the latest UN Security Council resolutions.

President of Chile Sebastián Piñera received on Friday Morocco’s top diplomat who conveyed him a verbal message from King Mohammed VI, reaffirming Morocco’s willingness to further develop relations between the two countries in the various areas.

For his part, President Piñera expressed his country’s keen interest in promoting bilateral economic cooperation, increasing trade with Morocco and enhancing relations in the fields of culture, energy and education…

Chile also looks forward to Morocco’s active participation in the UN Climate Change Conference (COP 25) due in Santiago in December.

Bourita’s visit to Santiago is part of an international tour that included stops in Brazil, Suriname and Dominican Republic to counter the Polisario hostile propaganda and build strong alliance with these countries.