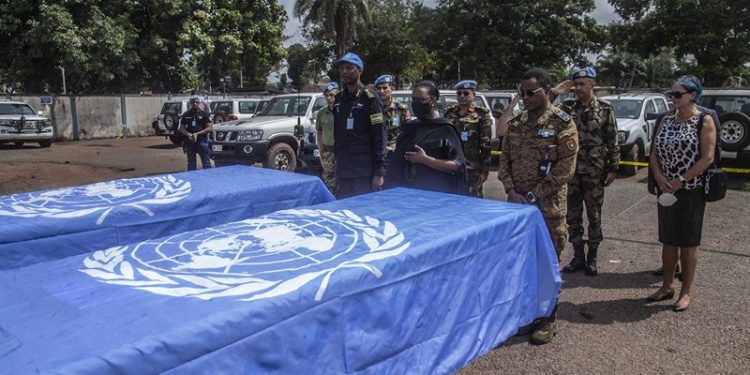 Two members of the Moroccan blue helmets of the MINUSCA mission died in the Central African Republic, the UN mission announced on Twitter, without disclosing their identity.

The two Moroccan blue helmets, who were part of the peacekeeping mission in the Central African Republic, died on June 12 in Bangassou in the east of the country.

The UN mission there paid tribute to the two Moroccans and announced that the remains will be repatriated to Morocco.

“The Special Representative of the Secretary General of the United Nations, Valentine Sendanyoye Rugwabiza and the leadership of the MINUSCA paid tribute, on 06/14, to the 2 Moroccan blue helmets who died in Bangassou (in the East) on 06/12. Their remains will be repatriated to Morocco,” the twit said.

The circumstances of their death have not yet been revealed officially, however, according to some reports, the two Moroccan peacekeepers accidentally drowned on Sunday while bathing in a river in Rafaï, 700 km east of the capital Bangui, near the border with the Democratic Republic of Congo (DRC).

The United Nations has deployed since 2014 a peacekeeping force in CAR, a country in the throes of a civil war.

The Moroccan contingent of MINUSCA includes 750 Blue Helmets, deployed in the South East of the country since December 2014. Morocco also provides military observers and staff officers to the UN force.

Morocco currently deploys more than 1,700 soldiers in UN operations in the Central African Republic, the Democratic Republic of Congo, Sudan and South Sudan.