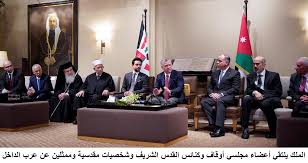 King Abdullah II of Jordan has commended the sustained support provided by King Mohammed VI to the holy city of Al-Quds.

This came during a meeting King Abdullah held Monday with members of the Jerusalem Waqf Council and Jerusalem Church Council, Jerusalemites and representatives of Arab Israelis in Amman.

King Abdullah II also commended the level of coordination between Morocco and Jordan in this regard.

King Mohammed VI is chairman of the Al-Quds committee, an offshoot of the Organization of Islamic Cooperation, and Rabat hosts Bayt Mal Al-quds, which extends support to the inhabitants of the holy city, helps them remain steadfast on their lands, and endeavors to preserve the city’s religious, civilizational and cultural landmarks. The agency also shores up the implementation of a number of programs and projects in the sectors of health, education and population.

The Sovereign is also a staunch supporter of the Palestinians and their cause and has repeatedly backed the establishment of a Palestinian state with East-Jerusalem as its capital.

Petra also said that the Jordanian Sovereign reaffirmed his country’s unwavering position on the Palestinian cause and Jerusalem, its defense of the just and legitimate rights of the Palestinians and its steadfast support for Jerusalemites.