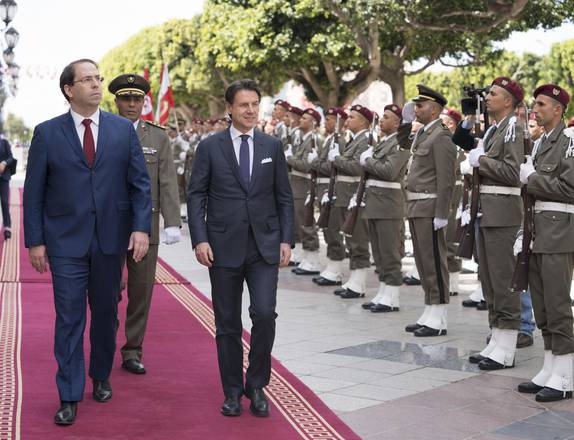 Libyan crisis at focus of Italian Premier’s talks in Tunis 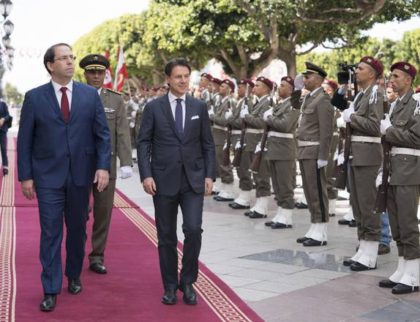 The Libyan crisis has been at the focus of talks Italian Premier Giuseppe Conte held on Tuesday in Tunis with President Beji caid Essebssi as well as with his Tunisian peer Youssef Chahed.

Giuseppe Conte, who is in Tunisia to take part in the 1st session of the Tunisian-Italian Higher Council of Strategic Partnership, voiced “profound concern” at the “open military conflict” in Libya.

Conte reiterated, in a statement to the media alongside the Tunisian Premier, that “there is no room for a military solution: a political process is needed in Libya,” reported the Italian news agency ANSA.

Commander of the self-proclaimed Libyan National Army Khalifa Haftar launched early April a military campaign to seize Tripoli from the UN-backed Government of National Accord (GNA) arguing th0at the Libyan capital is in the hands of terrorist groups linked to the Muslim Brotherhood.
However, Haftar’s forces have met a strong resistance from the GNA-affiliated militia groups. The fighting, which focuses on the Southern part of the capital, caused the death of over 260 people according to UN figures, while Thousands of people have been displaced.

During his talks with the Tunisian President, Giuseppe underlined the need to stop fighting in Libya and to prioritize dialogue and the diplomatic channels to settle the crisis.

“Dialogue is the only means to avoid the escalation and guarantee the unity and stability in Libya,” he was quoted by Tunisian news agency TAP as saying.

President Essebssi on his part said that Tunisia is following with “great concern” the latest developments in Libya, given their direct fall-out on the stability and security of the country and the whole region.

“Tunisia supports any initiatives aimed to put an end to fighting,” he affirmed, urging the Libyan protagonists to resume dialogue under the United Nations’ auspices as soon as possible.

During these talks, the Italian Premier commended the steps made by Tunisia on the path of democratic transition, in spite of the numerous difficulties, saying that this democracy is a factor of stability and balance in the Mediterranean space.

He indicated that Italy supports Tunisia in its development efforts and in the fight against irregular immigration, terrorism and extremism, said TAP.