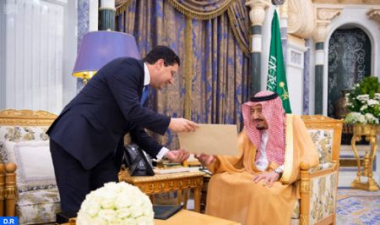 The message to the Saudi King was handed over on Wednesday at the Al Yamamah Palace in Riyadh, by Foreign Minister Nasser Bourita.

During this audience, Bourita conveyed to the Custodian of the Two Holy Mosques the greetings and consideration of King Mohammed VI.

King Salman on his part asked Bourita to convey to the sovereign his greetings and consideration.

The Royal message dealt with bilateral cooperation and the latest developments on the regional scene.

During the audience, the King of Bahrain hailed the strong historical and fraternal relations binding the two countries, as well as the firm determination of the two sovereigns to strengthen, diversify and broaden the perspectives of their partnership.

Saudi Arabia, Bahrain, and Kuwait are all members of the Gulf Cooperation Council, along with the United Arab Emirates, Oman and Qatar.