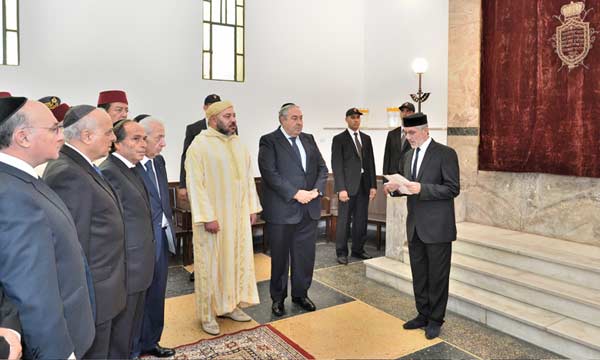 The Moroccan Exception in the Arab World

King Mohammed VI is carrying out a wide-ranging effort to revive his country’s Jewish heritage.

By Yaëlle Azagury and Anouar Majid
Ms. Azagury is a writer. Mr. Majid is the editor of Tingis magazine.
New York Times – April 9, 2019 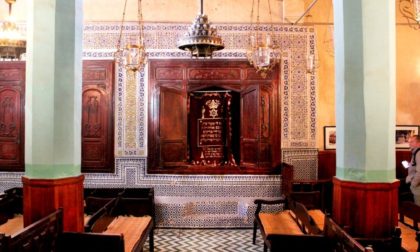 TANGIER, Morocco — On a recent balmy spring afternoon, a group of Muslim Moroccan students visited Rabbi Akiba, a jewelbox of a synagogue down an arched passageway in the Siaghine area of Tangier. Constructed in the mid-19th century, the synagogue underwent a meticulous renovation and recently reopened as a museum.
The students peered at the polished marble floors from the women’s balcony and examined a threadbare, hand-drawn map of the synagogues in the neighborhood. The tour of Rabbi Akiba is just one of many ways that Muslim students in Morocco are learning about their country’s Jewish heritage.

While Judaism in the Middle East and North Africa often evokes images of hostility, in Morocco, where we were born and raised, in Jewish (Ms. Azagury) and Muslim (Mr. Majid) families, that picture isn’t quite accurate. Our country boasts a rich history of Jewish-Muslim cohabitation, and in the past several years, the kingdom has taken significant steps to strengthen it.

The 2011 Constitution acknowledges that Morocco’s identity has been “nourished and enriched” in part by “Hebraic” components. Around that same time, King Mohammed VI embarked on a wide-ranging rehabilitation project that reflects his “special interest” in the cultural and spiritual heritage of the Moroccan Jewish community.

More than 160 Jewish cemeteries with thousands of gravestones have been uncovered, cleaned up and inventoried with funding from the kingdom. In addition to synagogues, former Jewish schools have been renovated with the king’s support. The original names of the Jewish neighborhoods where many of these synagogues have stood for centuries have also been reinstated. In 2013, Abdelilah Benkirane, then the prime minister of Morocco’s Islamist-led government, read a message by the king at the reopening of the newly restored Slat al Fassiyine synagogue in Fez in which he pledged to protect the Jewish community.

Other houses of worship, like the splendid 19th-century Nahon synagogue in Tangier, are now museums. The Ettedgui synagogue in Casablanca and the adjacent El Mellah Jewish Museum, founded in 1997 by Moroccan Jews who believe in a shared future between Jews and Muslims, were restored and rededicated by the king in 2016. El Mellah is the only comprehensive Jewish museum in the Arab world. There are plans for three more in Morocco.

The overtures extend to Morocco’s educational system and intellectual community. Last fall, King Mohammed ordered Holocaust studiesincluded in the high school curriculum. Around the same time, Zhor Rehihil, the Muslim director of El Mellah, started a weekly radio show about Jewish culture featuring Jews speaking in the Moroccan Arab vernacular, darija. Ms. Rehihil told us that the goal of the show, in which Moroccan Jews reminisce about their childhoods in villages around the country, is to familiarize them to a Muslim audience that often associates Jews with foreigners.

In November, the Council of Moroccan Communities Abroad and the Jewish community in the country invited Moroccan Jewish journalists, academics and community leaders residing abroad to Marrakesh for a weeklong conference highlighting the “respect of Jews for Islam and the respect of Muslims for Judaism.”

Much still remains to be done, but these are promising developments. The question is, why now?

With a mere 2,500 Jews left in the kingdom, compared with some 240,000 in the 1940s, this endeavor may indeed appear purely symbolic, or even designed to bolster Morocco’s image in the world. It will not bring Moroccan Jews back in any great numbers. But the kingdom’s embrace of Jewish heritage is a strong reminder of the Jews’ rightful place in Morocco’s history, despite some strained chapters.

In the 20th century, European colonialism, the creation of Israel and the emergence of Arab nationalism, imbued with elements of anti-Semitism, divided the Jewish and Muslim communities and set them on different paths. Fearing violence and persecution, Jews left the kingdom for Israel and elsewhere. But the Moroccan Jewish diasporain Canada, France, Israel and Venezuela have retained strong ties with their old homeland, often helping to fund renovations.

In the popular imagination, Jews and Muslims are seen as locked in an eternal struggle, but this wasn’t always so. From Morocco to Iran, Jews have lived in Muslim lands for centuries, with the two communities developing complex linguistic, cultural and commercial ties. Their coexistence was far from perfect, but as the historian Michel Abitbol and others have shown, Jews fared significantly better in Arab lands than their brethren in the shtetls of Central and Eastern Europe. From the Middle Ages throughout the Early Modern period, Sephardic Jews often prospered as merchants, translators, administrators and agents for the sultan.

Nowadays, the global media — which tends to dwell on what separates, rather than unites, Jews and Muslims — and the spread of Islamic fundamentalism on the internet has left Morocco’s youth largely unaware that a sizable Jewish community lived among them only 60 or 70 years ago. As the Moroccan anthropologist Aomar Boum has argued, Muslims have only “memories of absence” of their Jewish neighbors. Morocco’s gestures of openness help remind its citizens, and the world, that the country’s Jewish history matters and is worth honoring.

Yaëlle Azagury writes frequently about Moroccan Jews in the diaspora. Anouar Majid is the author of several books on Islam and the West and the editor of Tingis magazine.