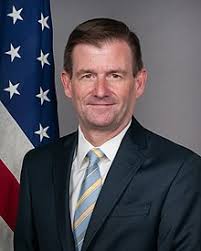 The Sahara issue will be at the center of talks US Under-Secretary of State for Political Affairs David Hale is paying to Rabat April 10 – 11.

The Under-Secretary of State will address the Sahara issue with senior Moroccan officials, including Foreign Minister Nasser Bourita.

David Hale’s trip to Morocco coincides with the ongoing debates on the Sahara issue at the level of the UN Security Council, with a briefing on MINURSO on April 1, followed the next day by the presentation of the new report of the UN Secretary General Antonio Guterres. The report will be debated on April 9 & 10 by the fifteen member countries of the Security Council, while a vote on a new resolution on the Sahara that is expected to renew the MINURSO mandate for another six months, is scheduled for April 29.

The State Department official will also discuss with his Moroccan interlocutors bilateral relations in the framework of the Strategic Dialogue between the two Allied countries.

North Africa Post's news desk is composed of journalists and editors, who are constantly working to provide new and accurate stories to NAP readers.
NEWER POSTMore Polisario fighters defect to Morocco
OLDER POSTAlgeria’s economy, a crisis in the making