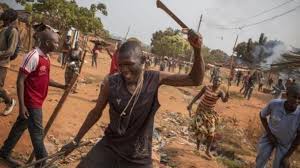 United Nations human rights experts have arrived in Mali to investigate last weekend’s horrific extermination of at least 157 villagers in the central region of the war-torn nation.

Armed men wearing traditional Dogon hunters’ clothing surrounded the village at dawn last weekend before attacking people in their homes in Ogossagou in the Mopti region.

The attackers targeted members of the Fulani ethnic community. The Fulani, who are mainly Muslim, have been accused of supporting a violent preacher, Amadou Koufa, who rose to prominence in central Mali four years ago.

UN mission spokesman Olivier Salgado tweeted on Wednesday that a team of 10 human rights specialists, a child protection agent and two MINUSMA investigators have been deployed to the Mopti region to conduct a special investigation.

In a statement on Tuesday, MINUSMA said a Dogon village in the region was also attacked on the night of the Fulani massacre, leaving at least four people dead.

International Criminal Court chief prosecutor Fatou Bensouda said this week that the crimes could fall under ICC jurisdiction and that a delegation would be sent to Mali.

As a reminder France helped Malian forces stave off a jihadist insurgency that took control of large parts of the troubled north in 2012.