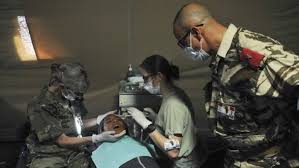 Pending the effective start of the African Lion 2019, the Moroccan-US yearly military drills, scheduled for April 1, units of the Royal Armed Forces (FAR) and the US Army have deployed in the region of Tata in Southern Morocco, a field hospital that will provide medical care to the local population.

As in the previous African lion editions, the drills feature humanitarian actions, like this military field hospital where medical services (consultations, surgery operations, drugs supply…) are provided, free of charge, to the populations of the region of Tata by medical teams made up of doctors and nurses of the Royal Armed Forces and the US Army.

This year’s Morocco-US sponsored exercise is taking place in the region of Agadir, Tifnit, Tan-Tan, Tata and Ben Guerir, with the participation of thousands of military personnel.

The drills also include training on counter-terrorism operations, land and air exercises as well as a tactical simulation.

In addition to Morocco and the USA, military units and observers from Canada, Spain, Great Britain, Senegal, and Tunisia, are taking part in the African lion 2019, held from March 16 to April 7.