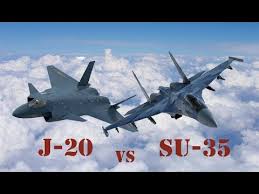 Russia will deliver 20 Su-35 fighter jets to Egypt as early as 2020-21 following a $2-billion deal signed between the two countries end of last year.

The Su-35 fighter is a fourth-generation multi-function fighter of Russia’s military know-how.

With this new deal, Egypt further underlines its position as one of Russia’s military hardware largest customers.

Cairo in 2014 signed with Moscow a $3.5-billion military contract that included artillery and firearms.

According to the latest report of the Stockholm International Peace Research Institute (SIPRI), published earlier this month, Egypt accounted for 5.1 percent of world arm imports in the 2014–18 period.

Egypt’s deal with Russia could irk US President Donald Trump, a strong supporter of President al-Sisi but in loggerheads with Moscow. Trump in August 2017 signed the Countering America’s Adversaries through Sanctions Act (CAATSA) meant to punish Russia for actions that include alleged election interference. The Act also targets countries that might sign for Russian military and intelligence equipment.