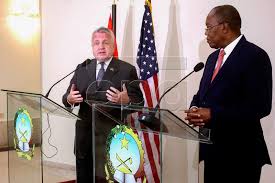 The United States will grant Angola around two million dollars in ongoing assistance for combating money laundering and terrorist financing, the US Deputy Secretary of State has announced.

John Sullivan made the announcement in Luanda Monday at a joint press conference with Angolan Foreign Minister Manuel Augusto at the end of a meeting of the “Strategic Partnership Dialogue” between the two countries, reported the Angolan news agency Angop.

He stressed that Angola is one of the main US partners in Africa, highlighting the country’s economic potential and the strength it represents for security and the fight against terrorism in the region.

John Sullivan expects the US State and Treasury departments to meet with the Angolan authorities to improve trust and the investment climate, as well as to resume correspondent banking through guarantees to fight money laundering and corruption, Angop added.

Speaking to journalists after a meeting with President João Lourenço, the US Deputy Secretary of State also reaffirmed the readiness of the United States to help Angola in the process of repatriating capital illegally transferred abroad.

The materialization of this intention depends however on the signing of an agreement in the field of justice, he said.

He confirmed that the government of President João Lourenço has made a good impression on his initial efforts to promote good governance both in Angola and at regional level.