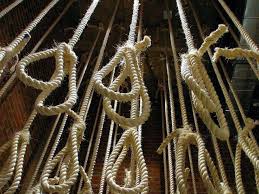 Egyptian prison authorities Wednesday executed by hanging nine members of the Muslim Brotherhood for their alleged involvement in the car bomb attack that killed the country’s top prosecutor Hisham Barakat in 2015.

The nine are part of 28 people arrested and convicted for the car bomb, which hit Barakat’s motorcade in June 2015, in capital Cairo.

Egyptian authorities blamed the outlawed Muslim Brotherhood and Palestinian movement, Hamas, for the attack. Both organizations denied any involvement in the attack.

The Wednesday executions add to 15 already carried out only this year. Those already executed include three people sentenced for the murder of a senior police officer in Cairo in 2013. Three others also hanged for the killing of a judge’s son in Mansoura in 2014.

Those executed Wednesday told the court during their trials they were tortured by security forces to make false confessions.

Since 2013, thousands of members of the banned movement have received lengthy prison sentences in mass trials. Others have been sentenced to life in prison.

President al-Sisi in 2013 removed Islamist and first elected Egyptian President, Mohamed Morsi and cracked down on his movement.