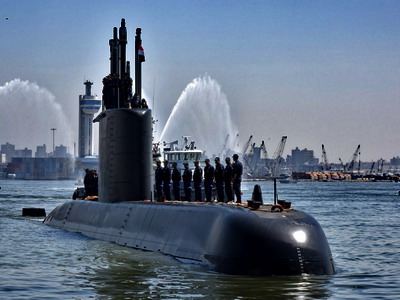 Germany sealed 13 military export contracts with Egypt worth €800 million between January 1 and June 5, making the North African country the leading client for German military equipment in the Arab world.

Germany, according to DPA which cites the German economic affairs ministry, so far this year has approved 56 military deals to the tune of one billion euros, with members of the Saudi-led coalition directly involvement in the conflict with Houthi rebels in Yemen.

Egypt, a member of the coalition, represents 13 of the contracts that will earn Germany €801.8 million.

Germany has emerged over the few past years as one of the new suppliers of military systems to Egypt, along with Russia and France, playing a growing role in equipping thze North African country with modern systems.
In the past five years, German defense exports to Egypt have jumped by 205%, compared with the total exports in the previous five years.

Germany had briefly suspended arms exports to Saudi Arabia following the assassination of the Saudi journalist Jamal Khashoggi in the Saudi consulate in Istanbul, Turkey.

The European powerhouse and several western countries including the USA had been harshly criticized by humanitarian organizations for endorsing the Saudi-led killing in Yemen.

European countries have also closed a blind-eye on human rights abuses in Egypt by President Fattah al-Sisi, as they signed multi billion dollars of military agreements with the General-turned President.

North Africa Post's news desk is composed of journalists and editors, who are constantly working to provide new and accurate stories to NAP readers.
NEWER POSTSale of 8 per cent of Morocco’s stakes in Maroc Telecom to yield around $1 billion
OLDER POSTNiger: UAE to set up military base near Libyan border