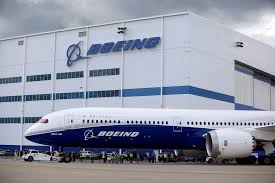 Boeing projects the Middle East will require $745 billion in aviation services through 2037 to keep pace with growing passenger and freight traffic in the region, the aviation giant said in a press release Tuesday.

The projections came in a new report released on the sidelines of the International trade fair for maintenance, repair and overhaul in the aerospace industry, MRO Middle East, held in Dubai Feb.11-12.

The high value services market is largely driven by the demand for nearly 3,000 new commercial airplanes in the Middle East over the next twenty years, more than tripling the existing fleet, the report states. The growing fleet requires aviation services, including supply chain support (parts and parts logistics), maintenance and engineering services, and aircraft modification.

According to the report’s findings, the Middle East will drive more than 8 percent of global demand for aviation services, representing $745 billion, and growing at a projected 4.6 percent annually.

“The Middle East is an unmatched location to connect the growing markets of Asia, Europe and Africa. This feeds the appetite in the region for new commercial airplanes and the services to operate and maintain those jets,” Ihssane Mounir, senior vice president of Commercial Sales & Marketing for The Boeing Company was quoted in the press release as saying.