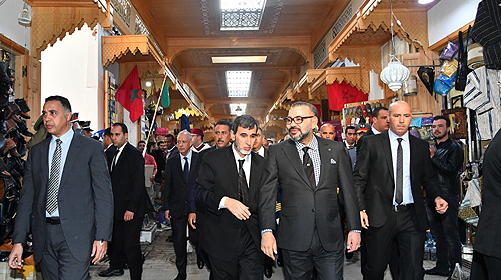 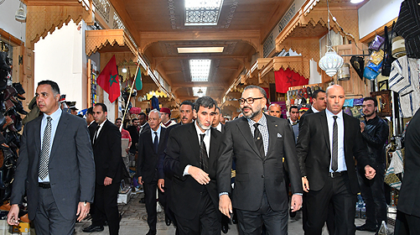 King Mohammed VI visited, on Monday, several projects launched in 2014 by the Sovereign to rehabilitate and upgrade the old medina of Rabat, Morocco’s capital city.
The royal visit shows the importance the Monarch grants to the conservation of the architectural identity of the Rabat medina, a UNESCO world heritage site, the promotion of its cultural & tourist landmarks and the improvement of the living and working conditions of its inhabitants.
During his tour, the King visited the Bab Chellah street, leading to the Mohammed V schools and the Great mosque, the Souk Essabat street and Bab El Bahr. The sovereign also visited El Melh square and Sabbaghine street still under restoration.
The rehabilitation & upgrading of the Rabat old medina will cost the North African Kingdom € 57.4 Million. Several projects have been completed. These include the revamping of Lagza street, the rehabilitation of the Kasbah of Oudayas wall, the renovation of El Marsa avenue, the development of community sport fields in Bab Chellah, the building of a shopping arcade and the consolidation of El Mellah cliff.
But other projects are under construction. These include public squares overhauling, the restoration of the wall from Bab Laalou to Bab El Had, the strengthening of old buildings, the renovation of old hotels and the building of craftsmen area.
On this occasion, the Moroccan Sovereign handed the keys of eco-friendly “Pedicabs” to the operators of this new service, which is available in many tourist cities around the world .
Morocco has launched a large-scale program seeking to restore old medinas in several cities including Casablanca, Marrakesh, Fez, Meknes, Essaouira, Salé and Tetouan.