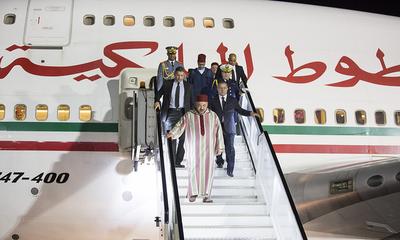 King Mohammed VI wound up on Thursday his official visit to Tanzania, second leg of his East-African tour that previously took him to Rwanda.

The Sovereign was also due to visit Ethiopia, but this third and last leg of the tour in East Africa has been “postponed” and not canceled, as reported by some media outlets.

The postponement was reported by barlamane.com, which quoted a source from the Sovereign’s accompanying party.

Banking on the economic and political success made by Morocco in West and Central Africa thanks to its “soft-power” approach and “win-win partnership”, King Mohammed VI, a strong advocate of South-South cooperation, undertook this tour to shore up economies of this region and enable the African continent to sail at full steam.

Contrary to the doubts expressed by some analysts, who argued that this English-speaking part of Africa was out of reach for Morocco because of language barrier, the outcome of the visits to both Rwanda and Tanzania proved them wrong. Nothing is impossible. Determination and perseverance are the key to success.

Besides, Morocco’s experience and its sharing and inclusive approach, which proved to be effective are popular in Africa.

In Rwanda, the first leg of the African tour, President Paul Kagame rolled out a red-carpet for King Mohammed VI and hosted a state dinner in honor of the Moroccan Monarch and his accompanying delegation. In diplomacy, these are highly eloquent gestures.

The statement commended the Moroccan King’s leadership and his noteworthy contribution to promoting peace, stability and sustained development in Africa.

After his visit to Rwanda, King Mohammed VI touched down in Tanzania, where the Sovereign received a similar warm welcome and had a private meeting with President John Pombe Magufuli. Afterwards, the two leaders chaired over the signing ceremony of over twenty cooperation agreements in the fields of economy, finance, renewable energy, agriculture, fisheries, air transport, hydrocarbons, mines, banking, tourism, health as well as science culture and religion.

President Magufuli hailed the sealed cooperation agreements and said they will lift up partnership to a higher level between the two countries sharing the same values and goals for Africa.

In his capacity as Commander of the Faithful, King Mohammed VI launched construction works for a new mosque in Dar es Salaam, fulfilling the wish and dreams of Tanzania’s Muslims National Council.

The religious institution, dubbed “Mohammed VI Mosque”, will be built over a 7,400 m2 plot and will accommodate more than 5,000 worshipers. The mosque will also include a library, a conference room, a cultural center and other facilities.

The Sovereign also donated 10,000 copies of the Holy Quran to the Muslims National Council, which signed on this occasion with the Moroccan ministry of Islamic Affairs a cooperation agreement in religious education, based on an “Islam of the middle path doctrine,” a vision of religion based on tolerance, intercultural dialogue and respect of other faiths.

The Royal tour in East Africa adds substance to Morocco’s foreign policy towards the continent, and renews, if need be, Morocco’s commitment towards Africa, a commitment underpinned by the principles of co-development and solidarity. It, once again, evidences Africa’s central place in the Moroccan King’s forward-looking vision and strategy and also adds an edge to the Kingdom’s official request to regain its natural place in Africa’s institutional family.

This tour also shows the King’s far-sighted statesmanship and deep conviction that Africans’ unity will ultimately triumph over ideology and that the North African Kingdom has a vital role to play in the continent.