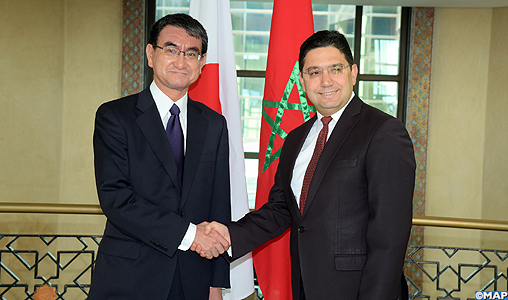 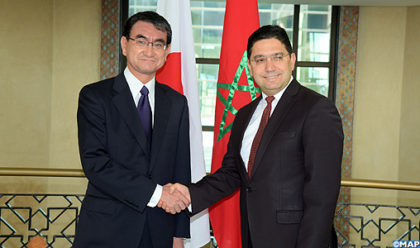 Japan’s top diplomat reaffirmed on Monday that his country’s government does not recognize the so-called “SADR”, which is armed, funded and sheltered by Algeria.

At a press briefing held after meeting in Rabat his Moroccan peer Nasser Bourita, the Japanese foreign minister Taro Kono said his country’s position on the Sahara issue had been clearly expressed at the ministerial preparatory meeting of the 7th Africa-Japan summit convened in Tokyo (Oct.5-7).

The presence of the self-proclaimed “Sahrawi Republic” (SADR), backed by Algeria, at a ministerial preparatory meeting of the Africa-Japan summit, “in no way means that Japan recognizes, implicitly or explicitly”, this entity, said Mr. Kono, who visited Morocco within the frame of a regional tour.

For his part, Mr. Bourita said that Rabat and Tokyo have agreed to strengthen their cooperation ties, affirming the strong friendship and partnership existing between the two countries will enable the two sides to overcome all difficulties.

During the 7th Africa-Japan summit, Mr.Taro Kono had made a strong statement following the withdrawal of the Moroccan delegation from the preparatory meeting of that summit, in protest against the presence of the separatists in the event.

“Even if a group which claims itself as a State which Japan does not recognize was sitting in this room, this does not mean that Japan in anyway implicitly or explicitly recognizes it as a State”, had said the Japanese Foreign minister, referring to the Polisario intruders.

“I would like to make it clear that it is not allowed to put any flag other than that of the African Union (AU) and Japan”, added Mr. Kono, warning that “anybody who disrupts the order will be asked to leave” the summit.

The Algerian regime provides Polisario separatists with Algerian travel documents and logistics enabling them to sneak in international conferences and take the floor to undermine Morocco’s territorial integrity.

But the Moroccan diplomacy had foiled the Algerian plot and unveiled to the world the direct involvement of Algeria in the Sahar regional conflict.