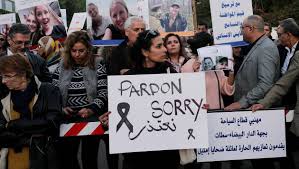 The murder of the two Scandinavian backpackers sent shockwaves across the country and trigged unprecedented chain of solidarity with the families of the victims.

Louisa Vesterager Jespersen, a 24-year-old Danish student, and her Norwegian friend, Maren Ueland, 28 were found dead inside their tent near Imlil by French mountaineers on December 17.

The ISIS copycat killers wanted to instill fear in the country but Moroccans of all walks of life stood firm. They did not give in to terrorism and showed a united face against terror. Vigils and minutes of silence took place in Rabat, Casablanca, Tangiers, Marrakech… and the village of Imlil, where the murdered tourists were found.

Filled with pain and sorrow, hundreds of Moroccans gathered across the country, lying flowers and lighting candles for the two murdered tourists, sending a strong message around the world that terrorism will never defeat Morocco, divide it, destroy its values of tolerance or disrupt its way of life.

On the contrary, something positive, a united front, comes out of this terrible tragedy that does not change the beauty of Morocco, nor the kindness, openness and generosity of its people.

Moroccan authorities captured four men involved directly in the appalling killing of the two Scandinavian tourists. Aged between 25 and 33, the killers pledged allegiance to the Islamic State group in a video made a week before their crime.

Nine more arrests were made on Thursday and Friday for links to the perpetrators. Moroccan investigators believe the four main suspects acted on their own initiative, despite their allegiance to the ISIS terror group.

According to Mr.Boubker Sabik, a spokesman for the Moroccan security and domestic intelligence services, the killers had headed to the Imlil area with the intention of committing a crime but without prior selection of their target.

They acted alone, he stressed, noting that “the crime was not coordinated with the Islamic State”. He also said that the arrest of nine more people in various Moroccan cities having ties with the main suspects helped to thwart a “terrorist plot” hatched against the country.

The horrendous twin-murder committed in the Atlas Mountains shows that the fanatics still constitute a serious threat to the national security of the country wherein all Moroccans remain united in their resolve to combat extremists and stand for the values of tolerance, freedom, mutual respect and coexistence between people of different cultures, creeds and traditions.