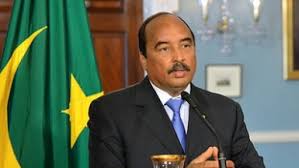 President Mohamed Ould Abdel Aziz has assured that he will not be a candidate for his own succession during the next presidential elections scheduled in 2019 as required by the Constitution.

The Mauritanian Constitution limits the number of presidential terms to two.

The President who was in Oualata (in the South) for the launch of the 2018 edition of the cultural festival of ancient cities, earlier this week said he would run for this office when his country’s law would authorize him to.

“I am sensitive to all calls. There are some who also call for the limitation of the presidential terms. Anyway, I am here to respect and ensure that the country’s economy is respected and, this constitution says that I cannot run for another term beyond two,” he said.

“I will continue to commit myself to Mauritania and involve in politics. I am here and I am not leaving the country. I will continue on the same track. Once the constitution will allow me to run again, I will do it. So, if I can not run for a third term, I will run later. The constitution does not forbid me to do so”, he added.

According to some observers, Mohamed Ould Abdelaziz could be thinking of a Russian Putin-Medvedev scenario.

The opposition has long suspected him of wanting to amend the constitution to be able to seek a third term, as did several African heads of state who wanted to stay in power beyond their presidential term.