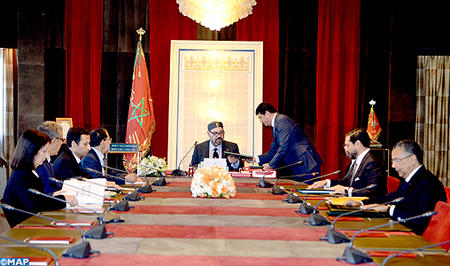 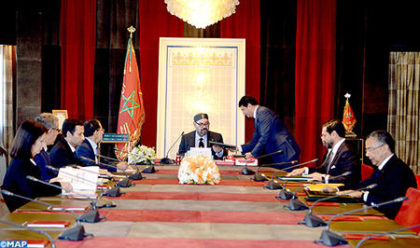 King Mohammed VI has spearheaded efforts to foster Morocco’s standing as a  renewable energy leader and hub in Africa with the launch of large-scale projects aiming to generate 52% of the country’s electricity needs from solar, wind and other renewable sources.

In this respect, the King on Thursday chaired a meeting at the Royal Palace in Rabat to follow up the implementation of the renewable energy strategy, in a year marked by the switch on of Noor Ouarzazate with 580 MW, which together with Noor Ouarzazate III, stands as the largest operating solar farm in the globe.

Morocco also completed two solar farms in the southern Saharan provinces of Laayoune and Boujdour with a joint capacity of 100 MW. These two plants were built thanks to green bonds, a first in the kingdom’s history.

These power plants are part of the new development model for the southern provinces, to which over 77 billion dirhams have been dedicated to improve infrastructure and the inhabitants’ living conditions.

Speaking at the meeting, head of the Moroccan renewable energy agency MASEN, Mustapha Bakoury, highlighted the next steps with regards to the completion of Noor PV II and Noor Midelt in the Atlas mountains.

As for wind energy, the King was briefed about several projects notably the Midelt 180MW plant and the 100 MW plant in Taza scheduled to be ready in 2019.

Next year will also be marked by the repowering of Koudia El Baida wind farm with 120 MW capacity.

At the end of the meeting, King Mohammed VI gave instructions to work in order to exceed the 52% renewable energy target in national electricity mix by 2030

The King also urged the government to promote the use of renewable energy in public buildings and to encourage energy efficiency.

The meeting was attended by the Head of the Government, Royal Advisors and cabinet members as well as heads of the national electricity utility.