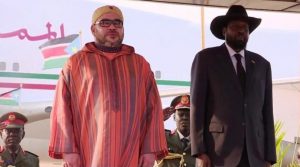 South Sudan Reiterates its Rejection of Separatism in Moroccan Sahara

South Sudanese Foreign Minister Nhial Deng Nhial reiterated that his country does not recognize the Algerian-backed separatist SADR entity, saying that South Sudan’s President had sent a letter in this regard to King Mohammed VI.

“In a letter, President Salva Kiir Mayardit clearly informed the Sovereign that the Republic of South Sudan has never established relations with the separatist (SADR) entity,” said the South Sudanese Foreign minister following talks in New York with his Moroccan peer Nasser Bourita.

He said South Sudan supports efforts towards a resolution of the Sahara issue within the aegis of the UN.

During the King’s visit to Juba, South Sudan’s President Salva Kiir Mayardit put the final nail in the coffin of the Algerian-backed SADR separatist entity by making it clear that there is no parallel between his country’s struggle for independence and the Sahara issue.

“While considering that the issue of the Sahara is different in its genesis, legal and political background from that of South Sudan, President Salva Kiir Mayardit acknowledges the efforts of the United Nations to reach a political solution to the regional dispute over the Sahara. The President welcomes the serious and credible efforts of Morocco,” said a joint statement issued following King Mohammed VI’s two-day visit to South Sudan.

During the King’s two-day visit, the two heads of state co-chaired the signing ceremony of bilateral agreements and memoranda of understanding (MoU) in the fields of Agriculture, Energy, Mining and Hydrocarbons, Industry, Investment, Tax Avoidance, Vocational Training and Economic Partnership between the two countries’ business communities.

On the same occasion, an agreement on urban development of South Sudan’s new capital was signed with Morocco contributing by $5.1 million to fund the technical and financial feasibility studies of this large-scale project, which offers huge business and job opportunities.

The sovereign had then visited the Moroccan field hospital deployed in Juba in January 2017 and handed Juba’s teaching Hospital medical equipment generously donated by the Mohammed VI Foundation for Sustainable Development.

King Mohammed VI had also handed over items to a number of internally displaced persons.

All these humanitarian gestures are reflective of the King’s care to bring a helping hand to the South Sudanese people.