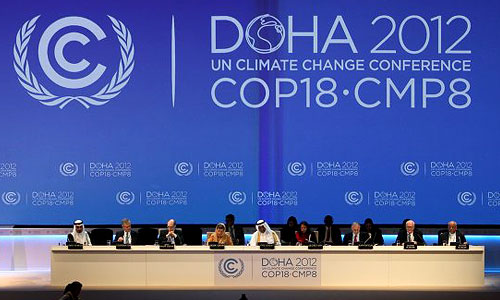 Climate change has emerged as one of the greatest challenges to international community. Increasing frequency and intensity of natural calamities caution that changing climate would have severe implications for economy and society and have potential to alter the course of development across the world.

In absence of robust infrastructure, resources and technologies to cope with rapid and substantial changes in global climate, scientists worry that more than 2°C rise in temperature would probably have ‘dangerous, irreversible and hardly controllable consequences for nature and human society’. Despite the projected severe implications of an unabated climate change for inclusive sustainable development and economic growth, international community appears divided on the ‘normative claims’, such as global climate regime, cooperation for climate financing or technology transfer. Recent trends indicate that, in line with rising emissions, prospects for the reduction or at least stabilization of CO2 – the main cause of global warming – have been gradually fading. Moreover, emission patterns of greenhouse gases illustrate that global CO2 emission reached an all-time high of 34 billion tones in 2011.

The Doha outcome provides only a marginal step towards emission reduction goals. While the Kyoto Protocol has very little significance in quantitative terms as it covers only 15 per cent of total global emissions

It was against this backdrop that the United Nations Conference on Climate Change was held from 26 November to 9 December 2012 in Doha, Qatar. The Doha Conference was crucial for shaping the future of Kyoto Protocol, new climate regime after 2020 and for formulating effective international mechanism for cooperation on implementation of Bali Action Plan 2008. Although the international community reaffirmed its commitment to limit changes in climate, the outcomes of Doha negotiations do not inspire much hope for meaningful and applicable actions. The Doha outcome provides only a marginal step towards emission reduction goals. While the Kyoto Protocol entered its second phase, beginning from 2013 to 2020, it has very little significance in quantitative terms as it covers only 15 per cent of total global emissions. Many industrialized countries, namely Japan, Russia, Canada and New Zealand, have not signed the second commitment period of the Kyoto Protocol. The US has steadfastly refused to enter into a global climate change regime. The largest emitter, China is also out of the regime.

Climate change finance and technology transfer are sine qua non for mitigation and adaptation to climate change. There has been no remarkable progress in generating sufficient climate fund and transfer of clean technologies to developing nations at the Doha Conference. The demands of developing countries for additional resources and access to advanced technologies have not been explicitly addressed in Doha conference outcomes. The AWG-LCA (Ad hoc Working Group on Long-term Cooperative Action under the Convention) was closed without any concrete steps on issues of financing, capacity building and technology transfer. The concept of ‘loss and damage’ was recognized in the negotiations. The Doha conference outcome merely encourages industrialized countries to keep up the level of US $10 billion per year assistance between 2013 and 2015. Technology transfer has also been pushed to the agenda of the technical bodies of the United Nations Framework Convention on Climate Change.

It will be mainly the developing countries and marginalised sections of the society that will have to deal with a severe, disproportionate impact of climate change. Africa is one of the world’s regions most vulnerable to the projected climate change. Most of the African countries are least developed and suffering endemic poverty and hunger. They are prone to natural disasters, such as droughts and floods, and a majority of the population depends on climate-sensitive sectors for livelihoods. An estimate from UNDP says that 43 per cent of the land on the continent is arid or semi-arid. The ‘Fourth Assessment Report’ of the Intergovernmental Panel on Climate Change (IPCC) notes that projected reductions in yield in some African countries could be as much as 50 per cent by 2020, and crop net revenues could fall by as much as 90 per cent by 2100, with small-scale farmers being the most affected. The absence of effective governance and economic and social institutions further undermines the coping capacity of affected people of the continent.

Having repeatedly failed to formulate an effective mechanism for reducing global emissions of greenhouse gases and provide resources in terms of technology transfer, climate financing and capacity building, the international community should be very much concerned for the vulnerable people in least developed countries – not only in Africa. Unchecked climate change could radically alter the prospects for growth and development in some of the poorest countries. Millennium Development Goals for 2015 are unlikely to be achieved in Africa. Genuine sustainable development is interlinked with effective poverty eradication, empowerment of people and providing economic opportunities in environmentally compatible manner. Effective and strong national, regional and local actions are essential, but appropriate action at the global scale is indispensable. The global environmental management system should be strengthened in order to take the crucial decisions for effective actions to contain the global warming.