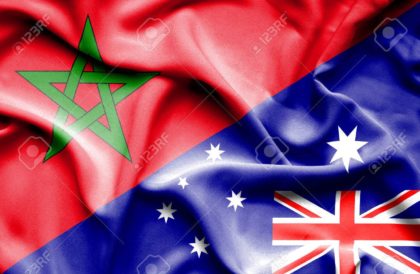 Waving flag of Australia and Morocco

Australian diplomacy welcomed Morocco’s autonomy initiative for the Sahara as a “good initiative” reiterating support for the UN process to resolve the artificial dispute over the Kingdom’s territorial integrity.

“The autonomy proposal is a good initiative,” said director of the department for North Africa and the Middle East at the Australian Foreign Ministry, Matthew Neuhaus, following talks with Secretary of State to Foreign Affairs, Mounia Boucetta, as part of bilateral political consultations.

The Australian official also reiterated his country’s support for UN efforts to resolve the artificial conflict over the Sahara.

“The political consultations between the two countries are a road map for the development of our excellent bilateral relations,” said Neuhaus,

The two parties discussed prospects for deepening cooperation in the fight against terrorism and in the field of immigration.