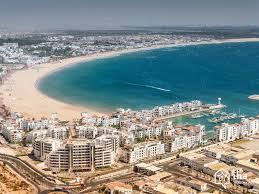 Souss-Massa Region to Become Platform of Exports to Africa

The Souss-Massa region, which attracted more than 18 billion dirham-investments in 2017, is poised to become a platform of exports towards Africa.

This new vocation of the region was stressed at a ceremony held Sunday in Agadir under the chairmanship of King Mohammed VI and during which the Souss-Massa Regional 2014-2020 Industrial Acceleration Plan was presented.

This regional plan is part of the industrial acceleration plan launched in 2014 and falls in line with the King’s strategic vision seeking, through the enactment of the advanced regionalization process, a fair, balanced and inclusive territorial development that is adapted to the specificities of each region.

“The regionalization-based approach adopted in the sector of industry, in accordance with the royal instructions, seeks to identify the productive activities benefitting the citizens, to capitalize on the potential of all and each region and to reach a new level of emergence,” said Minister of Industry, Investment, Trade and Digital Economy, Moulay Hafid Elalamy, while presenting the Souss-Massa plan during the ceremony.

He said the regional implementation of the Industrial Acceleration Plan will enable regions, each according to its own specificities, to promote productive activities and create jobs and wealth benefiting local citizens.

The industrial projects to be carried out in Souss-Massa aim to create 24,000 new jobs, in partnership with professional federations and private operators, Elalamy said.
He added that keen interest is granted to the agro-industry sector, which will make of Souss-Massa a processing platform for agricultural products destined to domestic use and to the African market.

Some 500 million dirhams of the funds needed to carry out the industrial projects in the region will be provided by the Industrial and Agricultural Development Funds, while another amount of 500 million dirham will be supplied by the private sector, he said.
The Industrial and Agriculture Development Funds, along the private sector and banks, will also extend financial backing to projects owners.

The regional plan provides for the promotion of new ecosystems, mainly in emerging sectors, such as automotive subcontracting, offshoring, leather, building materials and plastics. In this connection, a protocol related to 11 industrial investments in these sectors was signed during the ceremony.

The ceremony was also marked by the signing of eight agreements on a set of measures destined to support this regional implementation of the industrial acceleration plan. Part of these measures, there is the creation of an industrial free zone over a 300 hectares to attract export-oriented and job-generating activities. The promotion of vocational training and the setting up of a Technopark and an innovation city with ready-to-use premises and support services for SMEs and start-ups are also in the pipeline.

The largest investment, 4.4 billion dirhams or 29% of the overall amounts injected in the region, was poured in the water desalination plant project, jointly carried out by Seba and Amane El Baraka companies. Another flagship project, le Palais des Congrès, required an investment of 1.47 billion dirhams.

The tourism sector takes the lion’s share with 37.39% of approved investments in the region, especially the Atlantic coastal city of Agadir, which attracted 63% of the overall investments, mainly in tourism resorts and hotels (Taghazout resort, Riu Tikida Argan Bay, Taghazout hotel, Hyatt Regency, Taghazout Bay, Marriott, Hilton, a hotel by the Pickalbatros company…) recalled the daily.