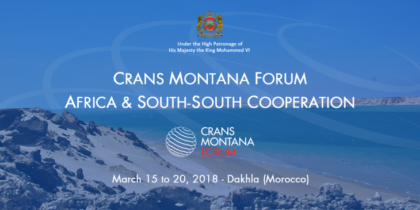 The Sahara city of Dakhla and pearl of southern Morocco is readying to host the 4th edition of the Crans Montana Forum to attract this March 15-20 some 3,500 participants representing 162 countries and over 40 international and regional organizations from around the world.

This annual event, become a must for all those who are supporting Africa and its world integration, will bring together Heads of State and Government, Ministers, regional & international organizations, MPs and above all top Business operators from Africa, other countries of the South and from the whole World, the institution said in a press release on its website.

This new edition will focus on strengthening solidarity, the economic, social and environmental development of the continent and its relationships with other countries in the World, notably in the framework of South-South Cooperation.

This 4th edition will highlight by a ceremony in honor of Moustapha Cisse Lo, speaker of the parliament of the Economic Community of West African States, who will be awarded the Crans Montana Foundation Award.

The award was granted to Moustapha Cisse Lo, according to the organizers, in recognition of his efforts at the head of the ECOWAS parliamentary institution to promote the integration, freedom and development of African peoples and especially to enhance the free movement of people and goods between the 16 ECOWAS member states.

The 2018 Forum will feature a number of new initiatives, including an international conference on “Urban Global Management, a New Challenge for all Africa”, a high-level panel on the “Ocean Economy & Fishing Industry”, a strategic sector for Africa, with a special focus on the Blue Belt Initiative, and an international conference on the “Silk Road in Africa & Asia-Africa Partnerships” with Morocco standing as a new gateway to the Silk Road in Africa.

A special program will be dedicated to the migration flows management, an issue on top of the African agenda as the continent is currently experiencing a significant evolution in terms of internal Migration. Participants in the program will try to develop an African approach through coordinating innovative actions, notably regarding development policies, employment and human rights. They will also discuss means of fostering a new Euro-African partnership, and implementing concrete actions in favor of youth to promote self-fulfillment and reduce Brain Drain.

The forum also features a meeting on energy security and renewables in Africa to focus on the ambitious policies undertaken by Morocco regarding access to energy, notably renewables, which represent a model for the whole Continent, the organizer say.

Other topics to be discussed at the forum include sustainable agriculture and its resilience to Climate change consequences; food and nutritional security in Africa; women’s empowerment in the economic & political frameworks, among others.