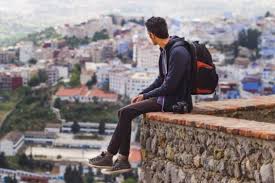 Why some Moroccans want to emigrate? What is their civil status, lifestyle, socio-demographic characteristics, level of education… These are the main questions addressed by a survey carried out by Morocco’s High Planning Commission (HCP) among over 15,000 households.

The survey results showed that the 23.3 pc of Moroccans wishing to emigrate are young men, (aged about 25 year-old) and single, looking for work or want to pursue their high education overseas. Actually, around 28.6% of Moroccan men want to migrate but only 17.7% of women dream of leaving Morocco.

Europe is their preferred destination (about 80 pc), followed by North America (8.8 pc), while only 2.8 pc vie Arab countries. About 25 pc of the persons intending to emigrate have secondary or higher education while 12.4 pc have no education, according to the survey, which defines non-migrants as Moroccans, aged between 15 and 59, who have never lived abroad for more than three months.

The HCP pollsters also found that 4 out of 10 of those wishing to emigrate have a vocational training.

The survey found out that around 41.1% of non-migrants from the Oriental region intend to emigrate, making it the region with the highest percentage, followed by Tangier-Tetouan-Al Hoceima (30.8%), Marrakech-Safi (26.7%), and Draa-Tafilalet (26.2%). Other regions recorded a percentage below the national average of 23.3%, with the region of Souss-Massa having the lowest share (10.5%).

More than 70% of Moroccans wanting to migrate have an economic motivation and 24.4% want to leave for social reasons.

While only a fifth (21.9%) of employed Moroccans want to migrate, more than half (50.9%) of unemployed non-migrants wish to leave the country.

The survey, which also polled 11,780 Moroccans currently living overseas, showed that one in four of these migrants are aged between 15 and 29, while the seniors represent only 3.9 pc.

The collected data also revealed that over 33.5 pc of Moroccan expatriates received a higher education and 24.5 pc have completed their university and post-graduate studies.

This survey, which is part of the MEDSTAT cooperation program for the southern Mediterranean countries, aims to provide data on the characteristics and behavior of current migrants, returnees and non-migrants.

A second phase of the survey, concerning forced and irregular migration, is scheduled for the first quarter of 2020.