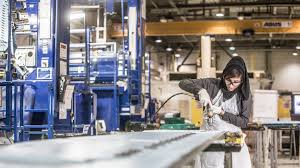 The Abu Dhabi-based Mubadala Aerospace is considering opening a new manufacturing plant in Morocco to be closer to its customer Airbus, said the company’s chief Badr Al Olama.

The North African Kingdom enjoys “a proximity to Europe. Being closer to the customers will be important for Strata”, a unit of Mubadala Aerospace, he added in a statement to reporters on the sidelines of the US-UAE Business Council meeting.

Al Ain-based Strata manufactures aircraft parts for both Boeing and Airbus. Besides Morocco, Mubadala is also planning to invest in manufacturing in the US in the next one to five years, said Al Olama

Mubadala is a pioneering global investor. It is active in 13 sectors in over 30 countries around the world. It invests in sectors such as aerospace, ICT, semiconductors, metals & mining, renewable energy and utilities, and the management of diverse financial holdings.

The rapid growth of the Moroccan aeronautic industry has attracted attention of the Emirati company due to the incentives granted to investors, proximity to Europe, low labor costs, stability and political will to make this sector a driving force of economic growth and development.

In 2016, American Boeing signed an agreement with the Moroccan government to bring in more suppliers to the North African Kingdom.

Under the “Boeing ecosystem” project, the US Company pledged to attract around 120 of its suppliers to boost Morocco’s aeronautics exports by $1 billion and create 8,700 jobs.

Boeing already has a joint venture with France’s Safran in Casablanca to build wire bundles and harnesses for aircraft makers, including its European rival Airbus.

Banking on competitive assets, Morocco has attracted some big aeronautics investors in recent years, including Bombardier, Eaton Corp… The aeronautic industry in Morocco, which employs over 11,500 people, achieved exports worth $1bn.

The sector is growing at 15 per cent a year. It aims to create 23,000 jobs by 2020, increase exports to $1.6bn per year and enhance the proportion of locally-produced or assembled components.

There are over 100 international companies already operating in Morocco wherein an aeronautics institute has been set up to train workers for the industry.

North Africa Post's news desk is composed of journalists and editors, who are constantly working to provide new and accurate stories to NAP readers.
NEWER POSTOpposition Figures in Egypt Call for Election Boycott
OLDER POSTSouss-Massa Region to Become Platform of Exports to Africa