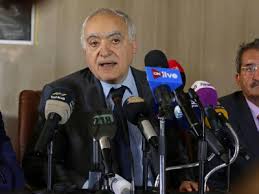 Libya: UN Rebuked for Derailing Agreement for Consensus among Libyans

A former Libyan official has laid into the United Nations for sabotaging efforts by Libyans to get together and for imposing east-based army commander Khalifa Haftar.

“The international community, especially the United Nations, is not serious about looking for a political solution in Libya,” said Mohamed Hussein Omar in an interview with Quds Press.

Omar is a former adviser to the Prime Minister of Libya’s National Salvation Government. For him, the newly appointed UN envoy to Libya, Ghassan Salameh, is only protecting foreign interest in the Libyan crisis.

“These are all efforts to cover up the regional and international trend to break the will of the Libyan people, and impose a military option on them,” he said, underlining that the UN is favoring a military option as it secretly endorses Haftar.

Omar accused France, Italy Egypt, the UAE and other countries of seeking their own interests in the crisis-torn North African country.

Libya has descended into chaos following the fall and death of Muammar Gaddafi in 2011, in a NATO-backed revolution. Since then, rival factions have been vying for power.

The country has two distinct governments; the namely UN-backed Government of National Accord (GNA), born from an agreement signed in 2015 in Morocco, and the east-based Beida government supported by the country’s internationally recognized House of Representatives (HoR) and its associate Libyan National Army, led by Haftar. Haftar is supported by the UAE, Egypt and Russia.

Meanwhile, the United Nations is preparing to deploy up to 250 peacekeepers to Libya to guard its base in capital Tripoli, as part of a plan to return its operations to the country, the UN Envoy Ghassan Salameh said.

The UN Envoy told Italian newspaper La Stampa that “a little under 250” peacekeepers “can be deployed in the coming weeks”.

The mission has been based in Tunis since 2014 but has gradually increased its presence on the ground in Libya and has been planning for months for a fuller return.