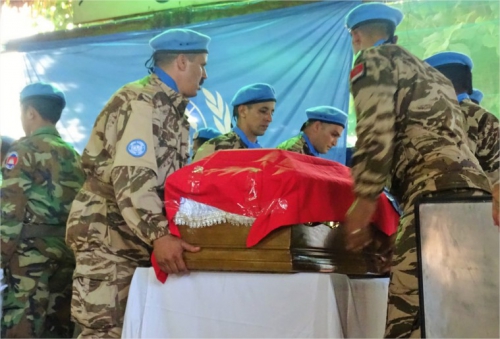 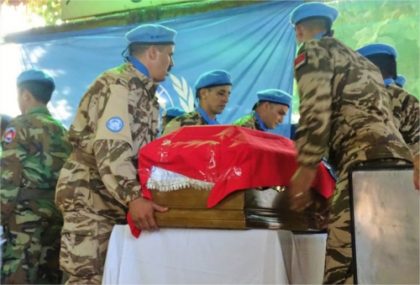 The death Saturday of a second Moroccan peacekeeper operating under the umbrella of the UN mission in Central African Republic (MINUSCA) was strongly denounced by the UN Secretary General Antonio Guterres.

The attack in the city of Bangassou also claimed the lives of civilians.

“The Secretary-General is outraged by the attacks perpetrated by suspected anti-Balaka against civilians and the United Nations Multidimensional Integrated Stabilization Mission in the Central African Republic (MINUSCA),” the UN Spokesperson said in a statement.

Guterres strongly condemned the attack on the UN peacekeepers, which, he said, “may constitute a war crime”. In the same vein, he urged Central African Republic authorities to investigate these attacks and bring the perpetrators before justice.

“These recent incidents amply demonstrate that the situation in the Central African Republic is still fragile hence the need for continued and sustained regional and international support to overcome the challenges at hand,” the Secretary-General’s spokesperson said.

The African Union, France and Spain have also strongly condemned the recent attacks against MINUSCA.

“The President of the African Union Commission, Moussa Faki Mahamat, condemns with no uncertain terms the despicable attacks by armed assailants on 8 and 13 May 2017 in Bangassou, in the south-east of CAR, and in the vicinity of this town, targeting the MINUSCA and causing several deaths and injuries among the UN peacekeepers,” the pan-African organization said in a statement posted Sunday on its electronic portal.

Spain condemned the attack on civilians and a soldier of the Royal Armed Forces (FAR) contingent on Saturday and offered its condolences to the families of the civilian victims and the deceased Helmet, as well as to the authorities of Morocco and the CAR, said a statement from the Spanish Foreign Ministry.

Spain reiterates its support for the Central African Republic, the United Nations, MINUSCA and other international actors in their efforts to consolidate peace in the African country.

This Monday (May 15), France also expressed its condolences to Morocco following the death of the Moroccan blue helmet.

“We express our deepest condolences to the families of the victims and to the Moroccan authorities,” said the French Foreign Ministry, stressing that France condemns with the utmost firmness the attack on the city of Bangassou and the MINUSCA contingent, which resulted in numerous civilian casualties and the death of a Moroccan blue helmet.

“All the light must be made on these odious acts, which can constitute war crimes and whose perpetrators must be brought to justice,” insisted the French Foreign Ministry in a statement made public by its spokesman.

Reiterating support to the Central African authorities and to MINUSCA in implementing its mandate to protect civilian populations, France said it is “determined to continue, in consultation with its European, African and international partners, its efforts for the stabilization and consolidation of peace in the Central African Republic.”

The Moroccan peacekeeper was killed in a fire exchange after an attack by the anti-Balaka group on a Moroccan checkpoint in downtown Bangassou. The attack also claimed the lives of several civilians.

The attack came just hours after the UN held a memorial ceremony to honor five peacekeepers, four Cambodians and one Moroccan, killed on May 8 in a nearby village of Yogofongo, in a deadly attack perpetrated by suspected anti-Balaka elements. Ten peacekeepers, 9 Moroccan and a Cambodian, were injured in this attack.

CAR is emerging from civil conflict, which began in 2013, with clashes between the mainly Muslim Séléka rebel coalition and anti-Balaka militia, which are mostly Christian.