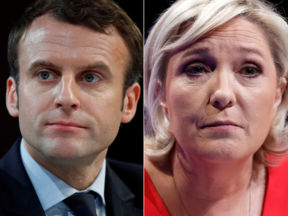 Head of the political movement En Marche Emmanuel Macron received the most votes in Sunday’s presidential election in France, followed by far-right populist Marine Le Pen, meaning the two will compete in a runoff on May 7.
Final results put Macron, an independent centrist, on top with 23.75 per cent of votes, while Ms Le Pen, leader of the French National Front (FN) came in just behind with 21.53 per cent.
All the other contenders were eliminated, including conservative François Fillon and revolutionary leftist Jean- Luc Mélenchon, who came in third and fourth with respectively 19.91 per cent and 19.64 percent, according to the Interior Ministry.
Mr. Macron, 39, abandoned traditional parties a year ago and campaigned on a pro-European Union platform. After the results announcement Sunday evening, he said that he wanted to be a “president of patriots, to face the threat of nationalists.”
“The deep seated feeling, age old feeling that has always pushed our people forward, the commitment to our country, the collective interest over division, this is what has won tonight,” Macron told his supporters in Paris, in a speech that called for unity.
“This election has opened the door to optimism, to a new path to hope for Europe, for the world,” he said reiterating his support for the European Union.
Le Pen, whose father lost election in the same condition in 2002, said Sunday’s victory was an “honor” that she received “with humility and gratitude.”
“From now on, I have an immense responsibility of defending the French nation, its unity, its culture and its independence,” she said.
“The French must take advantage of this historical opportunity offered to them, because what is at stake here is the wild type of globalization endangering our civilization.”
Over two decades, Ms. Le Pen has put criticism of globalization and Islam at the centre of her agenda. Throughout the campaign, she railed against immigration.
Francois Fillon and other losing contenders have called on their supporters to vote for Emmanuel Macron in the second round on May 7 to prevent the extreme right from coming to the helm of power as it happened in 2002. Yet, observers think that the stakes in 2017 are much higher than they were in 2002.