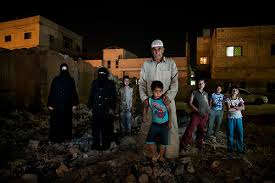 Morocco’s Foreign Ministry summoned Algeria’s ambassador in Rabat and denounced the expulsion of 54 Syrian migrants by Algerian authorities to the Moroccan border town of Figuig as an “inhumane behavior”.

During the meeting, the Foreign Ministry expressed concern at the expulsion by Algeria of Syrians undergoing vulnerable conditions. “It is immoral and unethical to manipulate the moral and physical distress of these people, (and) to sow trouble in the Morocco-Algeria border,” the Moroccan Foreign Ministry said in a statement relayed by MAP news agency.

“Algeria must assume political responsibility and morality concerning this situation,” the statement added.

Some 5,000 Syrians have gone through a migration regulatory process in Morocco, with several hundred receiving refugee status, according to the Ministry of Foreign Affairs.

In the same vein, the Interior Ministry issued a statement decrying Algeria’s ill-treatment of the Syrians who were forced by Algerian authorities to cross the border area.

The Interior Ministry said that the Syrian migrants were forced to cross and were abandoned in a desert border zone in searing heat.

The statement deplored the “inhumane” treatment of the Algerian authorities vis-à-vis this group of Syrian migrants, which includes women and children.

The Interior Ministry stressed that Algeria’s cruel behavior goes against neighborliness and amounts to an attempt to use the suffering of migrants in order to exert blackmailing on Morocco, adding that migrant expulsion by Algeria to the Moroccan borders has unfortunately become common practice.

Morocco has also denounced the atrocities and war crimes committed by the Assad regime in Syria and has called for a political settlement that preserves the territorial integrity of Syria.

As part of its humanitarian commitment, Morocco set up a field hospital in the Zaatari camp to treat Syrian refugees in the governorate of Al Mafraq, northern Jordan.