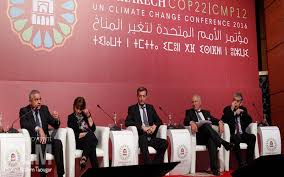 Thirteen centres of excellence and think tanks from Africa, Europe, Asia and Latin America came together, on Monday in the Moroccan COP22 pavilion, to launch a network dubbed The International Climate Change Centre of Excellence and Think Tanks for Capacity Building (INCCCETT 4CB).

The network aims at catalysing cooperation and coordination between the centres of excellence in the field of capacity building for climate change mitigation and adaptation in order to boost efforts towards the implementation of the Paris Agreement.

Speaking on this occasion, Nizar Baraka, President of the COP 22 Scientific Committee, and President of the Economic, Social and Environmental Council, highlighted the role that these centres can play in promoting capacity building efforts as part of south-south and north-south cooperation.

“Capacity building is a priority for Morocco’s COP22 Presidency along with adaptation, funding, NDCs, technology transfer and innovation,” said Baraka.
Speaking on the same occasion, Argentina’s Under-Secretary for Climate Change and Sustainable Development, Carlos Gorissen, welcomed the initiative, saying that the network is well placed to act as a “bridge between policy makers and the scientific community”.

The Network founding members agreed to establish a permanent secretariat at the Competency Centre of Climate Change (4C Maroc) in Morocco.