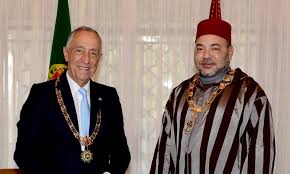 King Mohammed VI held, at the Royal Palace in Casablanca on Monday, tête-à-tête talks with Portugal’s President Marcelo Rebelo de Sousa, who arrived earlier in the day for a visit to Morocco.

During their encounter, the Sovereign decorated the Portuguese Head of State with Wissam Al Mohammadi, the highest honor in Morocco, while President Marcelo Rebelo de Sousa decorated King Mohammed VI with the Grand Collar of the Military Order of Saint James of the Sword, the highest Portuguese honorary decoration awarded to foreign heads of State.
Later in the evening, King Mohammed VI hosted an official iftar in honor of the Portuguese President and his accompanying delegation at the Royal Palace in Casablanca.

The Portuguese President’s visit, his first to an Arab country, reflects the high quality of Moroccan-Portuguese relations, which are based on a strong partnership and shared will to strengthen the multifaceted ties between the two countries, the Ministry of the Royal Household, Protocol and Chancellery had said in a press release announcing the presidential visit.